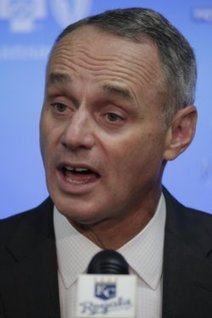 The policy also covers sexual assault and child abuse, with full agreement from the players’ union.

Click on the following link for the article: sports.yahoo.com

Dave Tate’s comments. You may have seen that I have been discussing in various posts since May the NFL/Goodell/Brady situation and fiasco. Now comes the MLB domestic violence, sexual assault and child abuse policy.

Does the Players’ Union really want to give the Commissioner and MLB apparently almost unlimited authority to punish? I have argued in California an appellate case over interpretation of a collective bargaining agreement and terms in that agreement pertaining to dispute mediation provisions. At least in California courts are hesitant to override collective bargaining agreement provisions.

The players can’t want the Commissioner to have such arbitrary and possibly unlimited power and authority. And as each player’s factual and legal situation is and will be different, players really don’t know how they will be treated or whether it will be in a fair and reasonable manner, or the extent to which the Commissioner will seek to punish a player for alleged player lack of cooperation (i.e., the player being willing to give the Commissioner the player’s smart phone, all phone records, all phone and text messages, and all emails, the player answering all questions, and the player being willing to be interviewed and cross-examined multiple, and perhaps unlimited times).

See also my prior blog posts relating to the Goodell/Brady fiasco (posts dated May 7, 14 and 20, and August 13), and my June 7 post why everyone needs an on-call crisis quick response attorney, http://wp.me/p5c0al-f5.